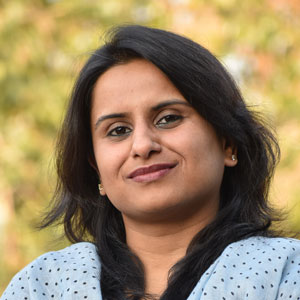 Dr Amrisha Pandey is enrolled as a lawyer in Indian Bar Council with a lifetime membership. She completed her graduation BALLB (Hons) in 2011 from India. She holds an ‘LLM in International Environmental Law’ (2012) from the University of Nottingham (UK) and the PhD from University of Leeds (UK), the topic of her doctoral research was ‘Regulation of Freshwater and the Access to Right to Water in India’ (March 2015 – February 2019).

Before joining the GMU she had served a semester as a guest lecturer in the School of Planning and Architecture in Bhopal (2020) and from the beginning of the year 2019, she had the opportunity to work in a City-Consultancy firm based in Mayfair, London.

She is a member of the International Water Research Organisation and an active member of the Water Security Taskforce and Early Young Career Professional Task Force. She is shaping to be an international law scholar with her remarkable presence and academic contribution to international conferences and forums.

Some of the recent publications;